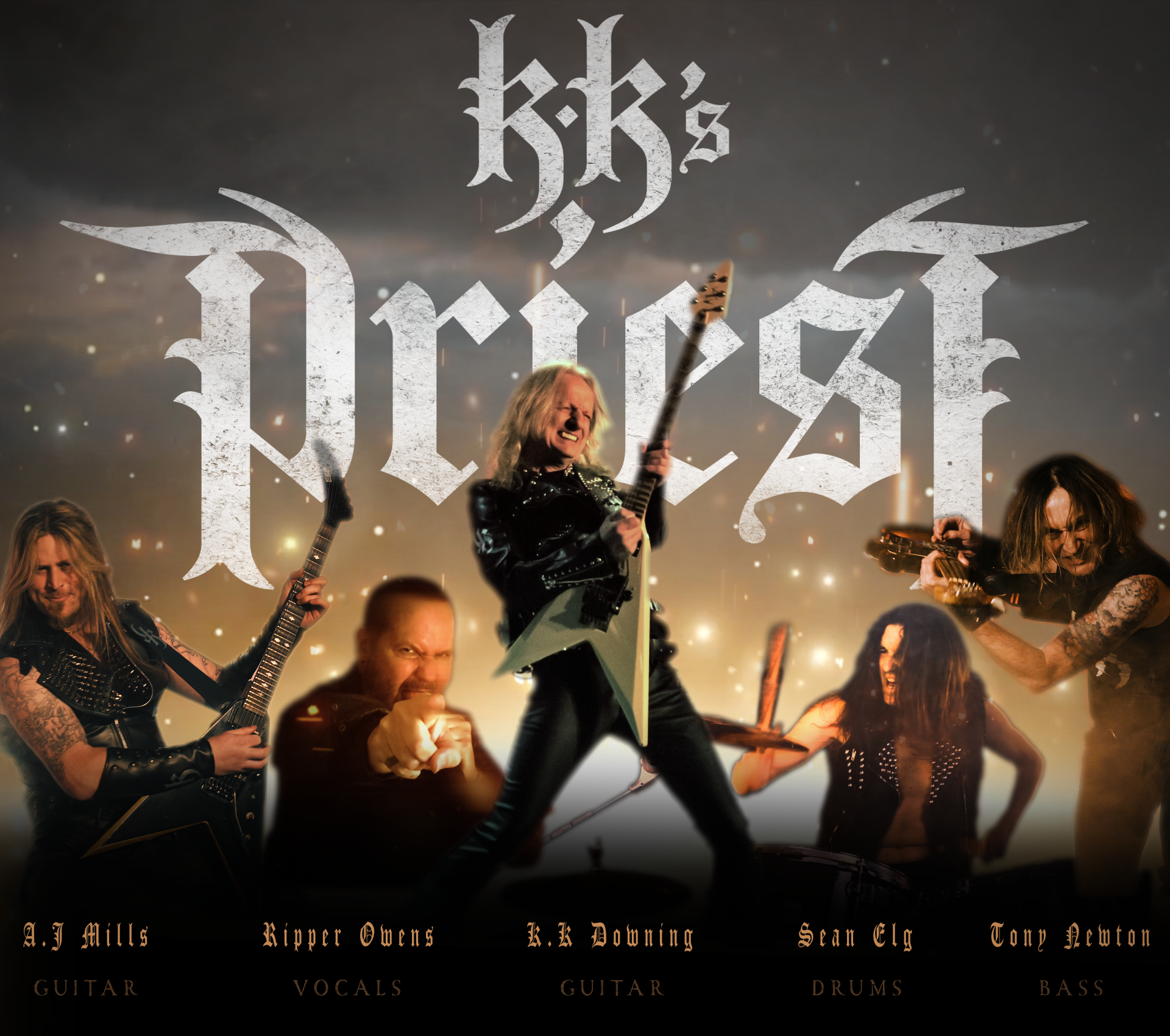 
You can’t keep a heavy metal legend down. Although it’s been nearly a decade since guitarist and songwriter K.K. Downing departed Judas Priest, the famous band he co-founded and played with for 40 years, he was never really going to retire. It was only a matter of time before he reclaimed the spotlight.

K.K. has had metal coursing through his veins from the beginning, starting in the Midlands region of England where Judas Priest was born. He chronicled his life odyssey in his 2018 autobiography, and his passion for his chosen genre is well represented with his new band K.K.’s Priest and the thunderous debut album Sermons Of The Sinner.

The album cover features a mysterious figure robed in a monk’s habit, whom Downing slyly states may or may not be him, holding a book of sermons. He says the “sinner” in the title refers to his famous solo in that classic song of the same name and also reflects his sense of alienation from the groundbreaking group that he helped create. “The whole concept is the fact that I continue proudly to be who I am and what I am and do what I do,” declares Downing. “It's been nearly 10 years. I'm back making music.”

And his disciples are ready to receive his sermons. He’s brought a former bandmate along for the ride, and they have unleashed an album with a modern sound that hearkens back to what fans have always loved about Downing and his music and which still sounds fresh. “All of my life, people always wanted an album that we've made in the past,” muses Downing. “‘What's the new album like? Will it be anything like British Steel? Will it be anything like Sad Wings?’ People hoping you're going to make a record that you've already made. So in a way this record just sounds like something that has already been made or should have been be made. It does have a lot of things that are connected to the past. For example, ‘Brothers Of The Road’. If you take all the lyrics off and just listen to the music, maybe you could be listening to ‘You’ve Got Another Thing Comin’.”

After years of quietly enjoying life away from the rigors of the road and intense studio recording, Downing emerged again on stage in August 2019. His former bandmates had been given the Heavy Metal Hall Of Fame award at the Wacken Open Air festival that summer, and HMHOF board member Steve Goldby wanted to give the guitarist his award at Bloodstock. From there, the conversation led to Downing performing a few songs with Ross The Boss. The performance electrified the crowd and reinvigorated Downing. In November of that year, he put on a show in Wolverhampton, UK with former Judas Priest singer Tim “Ripper” Owens, former drummer Les Binks, Megadeth bassist David Ellefson, and Hostile guitarist A.J. Mills. Downing had produced two albums for the latter band. Spanning Judas Priest’s catalog, this superb and successful show sent shockwaves throughout the metal world: K.K. was back and the fans were clearly hungry for more.

Rather than simply rely on his past successes and go on the road performing classic Judas Priest songs, the renowned guitarist did what he has always done – make new music. And songs that fans would want to hear and sing along to in concert. Downing assembled Owens, Mills, former Voodoo Six bassist Tony Newton, and DeathRiders/Cage drummer Sean Elg to create Sermons Of The Sinner, an album that celebrates his classic metal roots and encourages us to cherish those iconic pioneers whom we still have with us. He jokes that KK’s Priest is “like a new old band. Or an old new band.”

“The ultimate message is we've moved away from this music that we loved for so long and we're so dedicated to, and now we're in a situation where lots of people are actually passing away,” explains Downing. “We've lost a lot of great people – Dio, Lemmy, I could go on – and that's gonna be accelerated over the coming years. Basically, enjoy everything that's left of this brand of metal including from me. It's not going to last forever.”

Downing spent four months writing and recording Sermons Of The Sinner and, along with new ideas, he even resurrected a few archived riffs from the ‘80s. (Can you pick them out?) After partnering with Explorer1 Music Group, the album was originally intended for release a year ago, but with the Covid pandemic curtailing everyone’s release and touring plans, Downing pulled back and spent two more months tweaking the album to how he wanted it. The extra time paid off.

High speed album opener “Hellfire Thunderbolt” offers a fictitious take on how metal arrived before the masses were ready for it, so it gestated in the late ‘60s before exploding in the ‘70s and ‘80s. Rousing rockers like “Raise Your Fists” and “Wild And Free” revel in the passion and excess that metal fans embrace. The guitar interplay is intense and inspiring, and the band is firing on all cylinders.

“The Return Of The Sentinel” is a bold choice to close the album. Not only is it a sequel to the classic track from Judas Priest’s 1984’s platinum-selling Defenders Of The Faith album, it’s a nine-minute epic that doesn’t play by the rules. The first half is stirring metal, and the latter half is somber and subdued, which reflects the tale of a being who, once a dispenser of justice and death, now faces his own mortality.

Conversely, KK’s Priest is alive and vital. They have plans to tour later this year with some Ripper-era Judas Priest songs tossed into the mix, and Binks hopes to make appearances at shows. “Les was able to do the short set at the Steel Mill,” says Downing. “But he had a wrist injury after that and wasn’t able to do the album. Les wants to jump on the stage and a play a couple of songs, although he is not going to be able to play a full set. He will be our special guest.”
Downing is hoping to reach as many headbangers as he can worldwide - from Europe to North and South America. Sermons Of The Sinner is a love letter to the music he helped create and evolve and to the devoted followers who have supported it. “I'm talking about the diehard fans that are not going anywhere,” says Downing. “They're not certainly going to jump on a different genre of music just because a lot of their heroes are unfortunately passing away. And that sentiment is in this album where we said in the title track, ‘time is running out for us, things may never be the same, but the sermons of the sinner center can help us rise again.’ Because you never know when the last gig is going to be the last gig, so to speak. I'm pretty optimistic. I'm working on material for the second album.”